What are the different types of epidural steroid injections?

Home > Blog  > What are the different types of epidural steroid injections?

01 Sep What are the different types of epidural steroid injections?

Since the 1950s, epidural steroid injections have been a mainstay for the treatment of pain due to a pinched nerve. This includes sciatica along with spinal stenosis.

As the decades have gone by, there are now three types of epidural injections for Seattle pain doctors to choose. Here’s an explanation of those three.

The initial type of epidural steroid injection that was invented is called interlaminar. This involves placement of the needle through the soft tissue covering over the spinal canal between the bones of the spine, which are called the lamina.

While modern pain management doctors in Seattle use image guidance for needle placement, it was very common in previous decades to place the needle blindly. Studies found that up to 40% of those blind need a placements resulted in the steroid being placed inaccurately.

This makes the caudal epidural injection a great procedure for spinal stenosis, where typically multiple levels are pinching on nerve roots due to the overgrown soft tissue and bone from the arthritis.

The third and newest type of epidural steroid injection is called a transforaminal injection.
During this procedure, the numbing medicine and steroid is placed just outside the foramen, which refers to the opening where the nerve root comes out of the spine.

This means that the medication goes much closer to the area where the nerve root is actually being pinched by the herniated disc. When looking at the results of epidural steroid injections for sciatica, radiculopathy or with spinal stenosis, there have been dozens of studies performed.

It is important to look at the studies involving use of image guidance, otherwise, there’s a high likelihood of misplacement of the medication. Overall results have shown good to excellent outcomes from 50% to 90% of the time with these injections. There have not been big differences between the various types of epidurals performed. 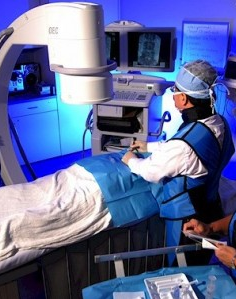 The risks involved with an epidural injection are less than 1%. These include a slight risk of infection, bleeding, nerve injury and failure to work well.

There has been some concern over the fact that steroid medication is not on label in the epidural space. This is mostly a smear campaign, as over 40% of medications in use in America are being used off label. This does not mean the FDA has denied its use in the epidural space, it just means companies have not spent the tens of millions of dollars to file with the FDA about getting an additional on label indication.

Sorry, the comment form is closed at this time.