An Overview Of Regional Pain Syndrome

Complex regional pain syndrome is a condition that typically results in chronic pain of one of the arms, hands, legs or feet. It usually develops after an injury or trauma to the affected limb but is also associated with emotional trauma. The pain associated with the condition is usually ongoing and excessive. Additional symptoms include mild to moderate changes in temperature and skin color which may be accompanied by inflammation of the affected area.

The exact cause of CRPS is not known but it is believed by some to be the result of damage or malfunction of the peripheral and central nervous systems.Type 1 is also called Reflex Sympathetic Dystrophy. This type of CRSP refers to that which occurs during an injury or illness that is unrelated to the nerves in the affected limb. Type 2 CRPS, previously called “causalgia”, occurs in patients with confirmed nerve injuries.

Both types of complex regional pain syndrome share the same symptoms and treatments but there are also assorted theories about the various causes that may cause them. For 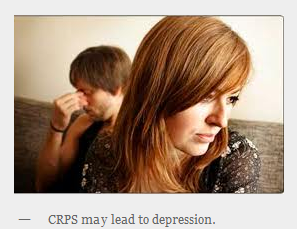 example, some theorists suggest that pain receptors in the affected limb become responsive to catecholamines. In those who develop CRPS as the result of an injury, the cause may be the result of an immune response. This would also explain the swelling and redness that occurs.

The association between trauma and CRPS has been shown through research to be a valid cause of the condition. People who fracture a limb and have the limb placed in a cast often develop CRSP. Once the pain from the condition occurs, it continues to worsen over time. Many who suffer from the condition find that the degree of pain they suffer is not in proportion to the actual injury. Not only can the pain from an injury to a toe or finger extend to the entire limb, it is possible for it to extend to the opposite one.

There is no specific test used to diagnose CRPS. Instead, tests are usually performed to rule out other conditions that might cause similar symptoms. One type of test that might be used is a triple-phase bone scan that will show doctors if any changes have taken place in the bones or the circulation of the blood.

Symptoms of pain may be mild during the initial phase of the disorder, making it more difficult to make a firm diagnosis. In most cases, doctors will determine a number of factors including the existence of an injury and whether the patient is experiencing a high degree of pain than would normally be expected. The area where the injury occurs will also be observed and the absence of any other cause of pain will be noted.

During the early phases of the condition, over-the-counter pain medications may be sufficient for treating pain. As the condition worsens, a variety of treatments may be used by pain management doctors to treat the various symptoms of CRPS, including:

Physical therapy can also be used when started during the earlier stages to decrease pain and improve flexibility. Pain management doctors offer the diversity of treatment options needed to provide patients with the most effective relief.

Seattle Pain Relief offers pain therapy from some of the most experienced and skilled pain doctors in the country. They help patients manage or eliminate pain that accompanies a wide range of conditions and injuries so that they can enjoy a better quality of life. Comprehensive treatments offer patients a better alternative than surgery with a high success rate.

An Overview Of Regional Pain Syndrome

Sorry, the comment form is closed at this time.